Transient ischemic attack (TIA) is a condition which is often referred to as a mini stroke. It is coined as such because it manifests as a symptom of stroke consisting of a warning sign that an attack of stroke might tend to occur. While the sign of a TIA is often negligible which people often finds as insignificant this should not be taken seriously because it is an initial symptom that a stroke might occur.

The characteristics of a transient ischemic attack

While transient ischemic attack is often associated to stroke a significant difference of the condition is that the clot formation in TIA is more transient than those formed in stroke. The symptoms usually rapidly occur and then disappear more quickly as compared to stroke. In most cases, the symptoms only last between 1 and 5 minutes. After the manifestation of the symptoms of a transient ischemic attack no permanent damage to the brain occurs. The significance of TIA in stroke is that about one third of people who experienced a transient ischemic attack suffer from a stroke a year after. Thus, TIA can provide a significant warning to those experiencing it that a stroke may develop overtime from their condition. It may take place in a few days, weeks, months or years after.

Symptoms of a transient ischemic attack – early warning of stroke

The most common manifestation of a transient ischemic attack includes visual problems, dizziness, chest pain, numbness, weakness, swallowing difficulties, nausea, vomiting, and unusual headache pattern. These are common symptoms shared by TIA to stroke. Transient ischemic attack is considered to be an early warning of stroke that should not be taken very lightly. The classic test for its symptoms is called the FAST test. This involves face dropping, arm weakness, speech difficulty and time to act such as calling 911. If these classic symptoms of TIA are present it makes the condition a critical emergency situation that one should be able to respond immediately.

Immediate response to the attack 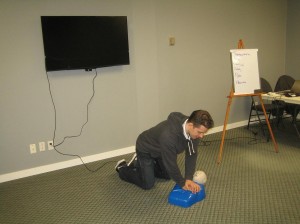 Learning how to administer CPR can save a person with TIA

In an emergency such as a TIA attack and the person becomes more unresponsive to you and may have lost his consciousness make sure to call for 911 immediately. It is crucial to make sure that the person is adequately breathing. It can become a potential life and death situation if the person fails to breath and a CPR administration will be required to help him overcome the situation. If the person is conscious but very weak, make him as comfortable as possible and loosen all tight clothing. Ask the person whether he has a medicine for chest pain and whether he has other medical condition such as a heart disease. Help him take the medicine if he has it in order to help him recover from his symptoms immediately.