You Are Here: Home » Internal Issues » How to manage hip bursitis

How to manage hip bursitis

Bursitis is the inflammation of the bursa in which the bursa in the hip becomes irritated and inflamed. The bursa that covers the bony point of the hip bone is called the greater trochanter. Another one is the iliopsoas bursa which is located on the inside or groin side of the hip and when this is inflamed, it is called hip bursitis. The pain can be felt in the groin area. The main symptom of hip bursitis is pain or “hip pointer”. The pain usually spreads to the outer thigh during night time especially when lying on the affected hip. The pain is usually sharp and severe and eventually becomes dull and achy.

Hip bursitis develops when the bursa sac that contains fluid that function in the lubrication of the gliding movements of the hip is irritated and inflamed due to physical activities such as standing too long and overuse of the hip joints. The condition causes aching, burning and stiffness of the affected area and also swelling of the bursa sac. In addition, the hip is usually sensitive to the touch. 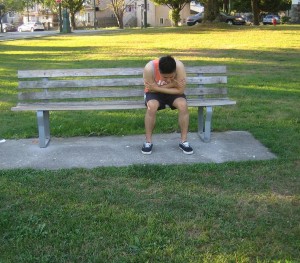 Symptoms start with a mild, dull soreness that can be felt around the outer part of the hip that is oftentimes caused by stooping and climbing stairs.