As suggested by the name, heat rash occurs in hot and humid conditions. Heat rash is a common skin condition that is characterized by severe itching of the skin leading to a prickly or stinging feeling. This occurs when an individual is perspires excessively and clogs the sweat glands. As a result, sweat is trapped under the skin, which leads to the formation of small, red bumps in the erythematous (redness of the skin) region. The affected region is usually a clothed area of the body, such as the neck, chest, back, armpits or groin.

Heat rash will usually go away on its own. However, if left untreated, it can become more severe and progress into complications, such as heat cramps, heat exhaustion or heat stroke. Heat cramps is the first of a three-part spectrum of heat related illnesses, with heatstroke considered as the most life-threatening condition.

Heat rash is also known as miliaria, sweat rash or prickly heat. It is most common in infants.

There are three types of heat rash, in order of increasing severity: miliaria crystallina, miliaria rubra and miliaria profunda. Parents or guardians must be wary for these symptoms on infants as they may not be verbal about their symptoms.

Although the main cause of heat rash is the blocking of the sweat glands, there are also several factors that can increase an individual’s likelihood of getting a heat rash:

Heat rash can be managed at home, rarely needing medical attention. Treatment must be given immediately to avoid aggravating the symptoms. Aside from this, the main goal of treatment is ease symptoms and ease discomfort. The following can be done to give first aid to heat rash: 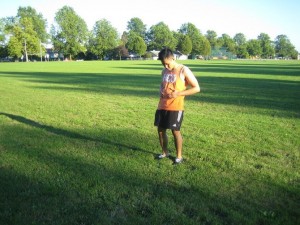 To learn how to manage heat rash and other heat-related conditions, enroll in First Aid Courses.

Heat rash is a skin condition characterized by intense itching of the skin leading to a prickly or stinging feeling. Heat rash is also called miliaria, sweat rash or prickly heat.