You Are Here: Home » Eye and Nose Issues » How to Manage Acute Sinusitis

How to Manage Acute Sinusitis

When the sinuses become inflamed, the resulting condition is referred to as sinusitis. Although acute sinusitis is a minor ailment that resolves within short time duration, it is quite irritating. In some cases, infections can lead to severe symptoms and other complications as well. Seek immediate attention if the condition persists for more than a few weeks. The material posted on this page is for learning purposes only. Consult your local physician if you think you have a serious case of acute sinusitis or any other medical emergency.

What Are the Symptoms?

There are numerous symptoms but the main ones to watch for include:

Children usually exhibit specific acute sinusitis symptoms when suffering from this condition. In this case, be on the lookout for signs such as:

What Are the Ways for Diagnosing the Ailment?

Doctors use various techniques to diagnose the ailment. They normally listen to the symptoms and check temperature as well. Since this condition causes tenderness on the sinuses, the doctor will conduct physical tests to establish this. When the diagnosis is unclear, the doctor may resort to more comprehensive testing that includes: CT scans, X-rays or blood test.

What Are the Acute Sinusitis Treatments?

Although antibiotics pop up as the most preferred treatment option, they’re not used in most cases. This is owing to the fact that the condition is often caused by a virus just as is the case with the common cold. Antibiotics are incapable of killing virus infections.

On the other hand, the victim’s immune system will alleviate the condition if bacteria caused the ailment. Apart from not working, antibiotics can also bring about unpleasant side effects. These include:

However, antibiotics can still be prescribed for treating acute sinusitis when the symptoms are chronic and/or severe. People suffering from other illnesses that weaken the immune system also require the use of 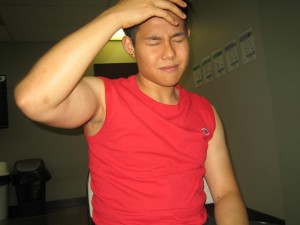 What Ways Are Used for Alleviating Symptoms?

Several techniques will come in handy in alleviating the symptoms. Try the following: