You Are Here: Home » Virus and Bacteria » Chlamydia Management and Treatment

Chlamydia is a sexually transmitted disease that commonly spreads undetected because the infected persons can be asymptomatic despite the infection. It is caused by the bacteria Chlamydia Tracomatis and may be transmitted through unprotected sexual intercourse. The symptoms usually appear one to three weeks after an intimate contact with an infected partner. Because the disease is often asymptomatic, it is coined as a silent infection. The disease is prevalent among African Americans who are 24 years and younger, living in urban areas and with low social economic status.

Most people who are infected with Chlamydia do not usually manifest any symptoms. Studies revealed that about 50% of men and 80% of women who are infected with the disease do not show any indication of having contracted the disease until the later stage of the infection. Women usually experience the symptoms of an unusual vaginal discharge, burning feeling on urination, pain during sexual intercourse, spotting or bleeding in between menstruation and lower abdominal pain.

Some female reproductive organs may also be involved in the infection such as the cervix, which may spread to the uterus and Fallopian tubes thereby causing pelvic inflammatory disease and infertility. Pregnant women infected with Chlamydia can also pass on the bacteria to the fetus, resulting in lung and eye infections during childbirth. Males manifest the symptoms of penile discharge, pain and discomfort during urination and swollen testes. The urethra of men may also be susceptible to infection and may spread to the epididymis which can cause pain. 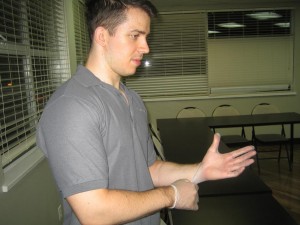 Put on gloves for protection

Chlamydia testing is needed to obtain a proper diagnosis. The tests are usually painless and may include urine and swab tests for both men and women. A cotton swab is done for diagnostic testing and on the specimen from the vagina, cervix, anus or penis. In some areas, the National Chlamydia Screening Program is available for application to persons who are 25 years and below. Chlamydia testing kits which you can do at home are also available, but they may not be as accurate.

Antibiotics are the first line of treatment of Chlamydia infection. If detected early, a single dose may be given. However, if another infection may be present or if the infection has spread to other reproductive organs, a longer course of antibiotics may be needed. If you are being treated with Chlamydia, your partner should be informed, tested and treated as well as you may be infected again after treatment.

First aid knowledge, knowing what to watch out for and when to seek medical treatment may help you prevent lifelong complications of Chlamydia. Ultimately, preventing the primary infection such as protected sex measures, avoiding promiscuity and annual screening are also important.